MBS faculty come from diverse backgrounds, denominations, interests and work experiences, creating rich and stimulating opportunities for students to learn and be challenged.

He involved in pastoral ministry from 1984 to 1990 before joining Malaysia Bible Seminary as full-time faculty for 25 years.

He is installed as the 5th principal on Malaysia Bible Seminary on Feb. 28, 2015. 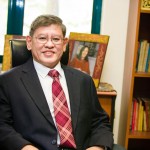 Rev Dr Tony Lim majored in Spiritual Theology under Dr James Houston for his M.T.S. at Regent College. During that time, from 1989 to 1990, he was the interim pastor for the Vancouver Chinese Evangelical Free Church (EFC). Prior to that, he was a pastor with the Petaling Jaya EFC from 1983 to 1987.  He returned to serve in Petaling Jaya EFC after completing his M.T.S in Canada. In 1997, he became Pastor of Emmanuel EFC, where he still serves. He was ordained by EFC Malaysia in 1998. He held the post of Vice-Chairman of the National Executive Board of EFC Malaysia for the maximum of two terms from 1997 to 2003.

At national-level ministries, Rev Lim has served as a Council Member of the Malaysia Bible Seminary and was also on the board of the Evangelism Commission of the National Evangelical Christian Fellowship (NECF) Malaysia. This commission was in charge of developing strategy and organising outreach for evangelism at the national level on behalf of Malaysian churches. He is currently a member of NECF’s Leadership Commission.

Rev Lim’s written works include Spirituality and Pastoral Care for the Ordination Council of the EFC of Malaysia (1998). He also wrote for Kairos Magazine the following articles: Pastoral Care: A ‘Family Systems Approach (June 2003), James Houston: The Transforming Friendship (April 2003), Blessed are the Weak? (April 2003) and Men in the Mirror: Male Reflections on the Grace of God (June 2002). He was also a contributing writer on 1 Samuel 17 to 24 for Scripture Union Malaysia’s One Year Devotional Bible Reading (Volume 2).

His international presentations include Biblical Discipleship at the 3rd All Asia EFC Conference in Kuala Lumpur (Sept 2001) and Challenges facing the Malaysian Church at the EFC of America’s 115th Missions Celebration in Minneapolis (Oct 2002).

Allison Lee has a passion for teaching others the Bible. Her early experience of this was teaching in Sunday School as well as ministering to university students and leading adult Bible study groups.  She has served in Canaan Lutheran Church, Kajang (1985-1992) and in missions and evangelism in Canada and USA (1999-2002).

He served as the Executive Secretary for OMF Malaysia from 1994 to 1997. From 1997 to 2008, Barnabas worked in the Forest Research Institute of Malaysia, a government department of the Forestry Department as a Research Officer. He was the former Pastor of Hope EFC until July 2011. After finishing his MDiv studies at MBS, he served as an Hon. Chaplain from 2014 until 2020. From 2021 until the present he served as faculty of MBS ED (Contractual).

He holds a master’s degree in electrical engineering from England, an M.A. from Fuller Theological Seminary, USA and the Doctor of Ministry from Asbury Theological Seminary, USA. He taught engineering in Kuala Lumpur for several years before serving as the founding General Secretary of the National Evangelical Christian Fellowship (NECF) of Malaysia for ten years. NECF is the umbrella body representing all evangelical churches in Malaysia.

He led Damansara Utama Methodist Church (DUMC) in Petaling Jaya since her founding in 1980 with a small team of people. Today the church has over 4,000 people in her weekly meetings. Dr Daniel Ho has spoken in some 40 countries in all six continents and has also contributed to several books and magazines. He is now the Founding Senior Pastor of DUMC having retired as Senior Pastor in May 2016. He and his wife, Doris are grandparents to two grandchildren.

He has a passion for evangelism and a heart to see revival in the Church and the Church impacting society and the nations for God and His glory.

Dr. Ng Kam Weng is Research Director of Kairos Research Centre. After his doctoral studies at Cambridge University, United Kingdom, he lectured on New Testament, Systematic Theology, Ethics and Philosophy, and served as Dean of Graduate School at the Malaysia Bible Seminary before assuming his current position at Kairos Research Centre. He was a Fellow at the Centre for the Study of Christianity in Asia (CSCA) at Trinity Theological College, Singapore. He is also a member of the Centre of Theological Inquiry, Princeton, and is with the Faculty of the Doctor of Philosophy Degree Program offered by the University of Stellenbosch, South Africa, in collaboration with the Oxford Centre for Religion and Public Life, Oxford, United Kingdom.

* No longer fellow at OCMS, Oxford

Rev. Dr Tan Jin Huat, currently a theological/Bible teacher at large. A seasoned theological educator with two local seminaries (MBS and STM) teaching New Testament, Theology, and Malaysian Church History for over thirty years. His theological studies took him to Trinity College, Bristol, London School of Theology (BA), University of Aberdeen (MTh) and the University of Wales/Oxford Centre for Mission Studies (PhD). Among his publications are ‘Preacher, Prepare Yourself’, ‘Brookes, The British and Christianity in Sarawak’ and ‘Planting an Indigenous Church: The Case of the BEM.’